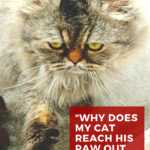 There’s this utterly adorable behaviour my cat Bjorn does every-so-often. He’ll be sitting or standing by me. Next, typically, he’ll stretch, then, as if to say, “Human, attention!” he’ll outstretch his arm and hold it outright in the air.

My typical reaction to this has been to immediately start petting and cuddling him because – well to be honest, who could resist?

But there are times he’s used this overwhelmingly affable behaviour to request something else.

One example – he’s used it in an attempt to get me to open a door, after standing staring at the entrance to our living room for a hot second without successfully getting me to open it for him.

Another? He’s used it to protest that it’s taking me a little too long to feed him, when it’s just before mealtime and he’s hankering for some grub.

Sometimes Bjorn will go so far as to touch a body part of mine, like an arm or leg, outstretching his arm and reaching his paw out to me when he’s cuddling.

And in these moments I feel like he’s trying to say, “Cuddles please!”

Well, at least these are things I think my cat means by the behaviour. There aren’t any studies being done on quirky cat behaviours like this, so you never really know. Doesn’t stop me from trying to guess, however!

Speaking of quirky cat behaviours we don’t really understand – there’s a really similar one to this one that other pet parents have spoken about their cats doing – reaching out and touch their face with their paws.

Super similar to the things Bjorn does, and it’s ever so sweet though my cats don’t do this particularly.

They have touched our faces with their paws, but really only ever did so by resting their paws on our noses we’ve held them up to our faces.

I do feel this is different from what most pet parents mean when they say their cats touch their faces with their paws, which is why I’d say my cats don’t do this behaviour – not yet at least!

I’ve spoken about so many odd and cute cat behaviours in the past. Things like lying on human chests, sitting up like humans do, meowing when humans sneeze, and sleeping at the foot of the bed.

There are plenty of behaviours cats engage in that are super perplexing, so each time I try to compile as many theories as I can come up with, and spend a considerable amount of time digging up other people’s theories to add to as comprehensive a list as I can muster.

That’s exactly what I’ll be doing here today – going through as many theories as I can that could explain why cats reach out their paws to their humans, and sometimes touch them, sometimes just have their paw in the air like my Bjorn.

If you find an explanation you think is more relevant to your cat(s)’ behaviour than others – do share in the comments below!

Also if you have any more theories on why cats do this, take a moment to share that as well, please! Now onto the theories…

1. Cats who reach a paw out could be stretching.

While I don’t think this is the end all be all to the story, I definitely think there’s an element of stretching that plays a role in cat reaching out behaviour.

The reason I say this is because, when my cat Bjorn does this, his paw out is almost always accompanied by, or preceded by, a full body stretch.

The paw out is almost like an extension of that stretch, like he’d do if he were scratching something.

Scratching is incredibly relaxing and thus a really positive behaviour for cats to engage in, so this definitely could be an element or maybe even the starting place for how this behaviour first started – before it began to imply something more for your cat.

I know my Bjorn is the type to scratch on a post with one hand for a while, so maybe this made him more likely to engage in the paw out to humans behaviour?

Not sure but if you see the same pattern with your cat, do let me know!

I’m really curious to learn if other cats do both – scratch with one arm as well as reach a paw out to request things.

Oh and if your cats also stretch and reach out simultaneously or stretch out before reaching a paw out.

2. Your cat may be trying to get your attention.

Cats really do like attention more than most people think, and some cats love to get absurd amounts of it – as much as possible!

There’s no end to the cute things cats seem to do to flag down human attention.

Things like sleeping on their backs, licking human faces, and sitting up like humans may not be entirely about getting human attention, but I personally think there is an element of attention-seeking to those behaviours, at least for some cats.

Then there are more frustrating behaviours cats sometimes engage in to flag our attention.

These are less fun, but also typically – in my opinion – have an element of needing attention from their humans.

3. When cats reach a paw out, they’re likely asking to be pet.

Speaking of trying to get attention for a particular reason – here’s the biggest one, in my opinion, if your cat’s sticking his or her paw straight out in the air like my Bjorn does: reaching a paw out in order to get your attention so you’ll pet or cuddle him or her.

In my household, flagging my attention for cuddles and petting is way more common than any other form of attention-grabbing for an end.

That being said, I’m pretty sure Bjorn’s used his paw stuck straight out to also do a few others. Like…

4. Cats who reach a paw out to humans may also be requesting food.

In the 30 minute lead up to a meal, my cats usually start getting too restless to just ignore me and go about their business.

Instead, my first cat, Avery, will beg me by scenting my glasses with his face, and sometimes, my more patent Bjorn comes over, sticks out an arm begging to be fed.

He’s also stuck out an arm to me as I’ve been delving out food before – usually when I’m going slower than usual, and in my opinion, in an attempt to hurry me along.

Could I be reading too much into this behaviour? Sure.

That being said, I do think it’d be far too much of a coincidence in terms of what was happening at or around the time of that paw in the air to be ignored.

I definitely think there’s a correlation, and it wasn’t just a fluke stretch to the air.

5. Or they could be requesting play.

Especially if you have a cat who reaches out a paw and gently taps you, then runs away, your cat sticking out a paw could mean he or she wants you to play.

Cats will often tap or quickly pat their fellow cats to start a play session with them, so it makes sense they would try the same with humans.

They might even be asking for a play session if they’re not tapping you at the end of the paw extension – who knows!

What do you think? In your opinion, has your cat ever extended a paw to ask to play? What led you to believe that’s what he or she was asking for?

6. A cat could also be asking for something else entirely – like opening the door.

Like I said, I don’t know for certain, but I’m pretty darn sure my cat Bjorn has used this trick to try to get my attention so that he could then ask me to open the door for him to the living room before.

He stood for a good few minutes in front of the door, staring, and when I wouldn’t oblige, he turned to me, stuck his hand up in the air and waited.

My other interpretation of the situation is that maybe he gave up on me opening the door and instead went to ask for cuddles and affection.

Both explanations make a lot of sense to me.

In your opinion, has your cat ever asked for something in particular that’s not cuddles, food, or play by reaching out a paw before? What was he or she asking for?

7. Especially if they touch you when their paw is out, this could be a sign of affection; like your cat is petting you.

I’ve heard of a lot of pet parents talk about their cats doing this – reaching out a paw then touching them while cuddling and being affectionate with their humans.

8. The act could be a form of mimicry, copying you pointing or patting them.

There are a number of cat behaviours that people think have something to do with mimicry – or the act of copying what humans do at least in part.

One such cat behaviour is cats meowing when humans sneeze – just after, almost as though they’re copying when we say, “Bless you!” after sneezes.

I definitely think there could be something to this theory, although we may never know for sure.

9. If your cat reaches a paw out toward your face, it could be a sign he or she trusts you enough to let a paw go near your mouth.

This is more of an indirect theory. Cats understand predators and that being eaten is a bad thing.

If they’re letting their paws near your face, especially if they do it for prolonged periods of time like in the process of asking for cuddles, they definitely trust you.

No way a cat would do this with anyone they didn’t trust – for fear of losing their paw to a bite!

Your Thoughts on Cats Reaching Out a Paw?

Why do you think cats sometimes reach a paw out to humans?

Did any of the theories above ring true in your opinion? Are there any that don’t seem likely?

Any you can think of that I don’t have up on this list that I should?

Does one or more of your cats do this? When do you feel they do it most? Are there different times they do it and do you think they mean different things?

Can’t wait to hear any thoughts, stories and explanations you can think of related to cats reaching out to humans with their paws in the comments below! 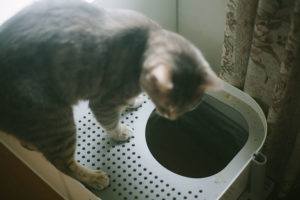 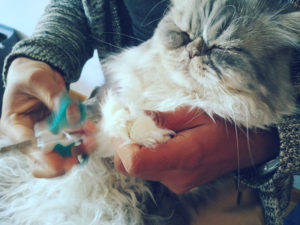 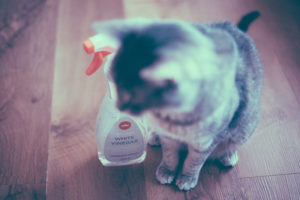