There are slew of corn based cat litters out there, more than I personally thought existed before looking into it, especially considering corn litters are nowhere near the most popular type of cat litter. I feel like the top spot in terms of popularity definitely goes to clay litters, and while I can live with a cat litter made with clay, I’m not a huge fan at all. Thus far, I’ve only ever found myself leaning toward either corn or walnut litters, though there are a number of types I still want to one day try.

The issue with switching? I love my current cat litter to bits and each and every time I’ve tried a new litter, I’ve been pretty disappointed. I’ve been using one particular corn based cat litter since back in 2017 when I first moved to the UK from Canada with my husband, Thomas, and our then single cat, Avery.

I’d really liked the litter we used back in Canada, Blue Buffalo Naturally Fresh Multi-Cat – a walnut cat litter, but one I sadly couldn’t get my hands easily or affordably in the UK.

Just before jumping the gun with trying a corn kernel based cat litter, I’d tried both a run-of-the-mill clay litter (which I could live with, but I didn’t find great), and a wood chip style cat litter (which I disdained, never again!). I was looking for something I’d like nearly as much as the Blue Buffalo Naturally Fresh, but didn’t want the litter I bought to be too expensive. My top choice to try: World’s Best Cat Litter – but I found the price per kilo to be pretty steep. I figured I’d give it a try anyway, in case it was so good it was somehow worth the price, and I’m so glad I did. I’ve tried a couple other cat litters since, but thus far, I haven’t found one I like better.

I specifically use World’s Best multi-cat formula. In case you’re interested, you can find my review of this litter here. I’ve tried their original formula, not a fan, but it is absolutely not a deal breaker to grab if they’re out of stock when it comes to the multi-cat formula, I would 100% prefer their other formulas over switching to anything else right now. I do think I prefer World’s Best over Blue Buffalo’s walnut litter, but it’s been so long since I’ve had Blue’s litter that I have no idea if that’s true for certain. Either way, I tried a walnut litter also by World’s Best – Nature’s Calling – while moving from the UK to Portugal around 6 months ago (yes, we’ve moved around with Avery quite a lot!); no. Not ever again. It didn’t clump as nicely, and with the way Avery digs like a maniac, it made such an enormous mess. Maybe with a cat who’s less of a fiend in the litter box. Though really, I think the clumping helps a ridiculous amount with keeping litter box smells at bay anyway, so probably still a huge no if I had the option. 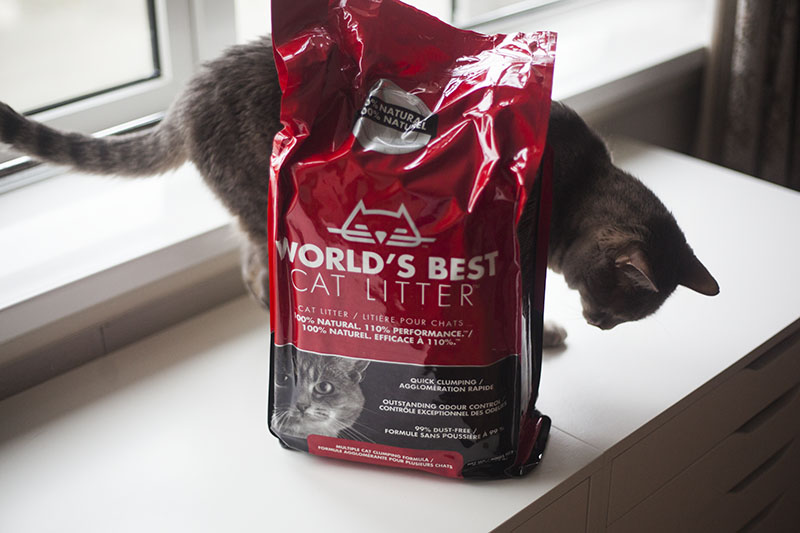 Things I adore about World’s Best that I think most corn litters would probably share in terms of features? Let’s start with what I’ve stated: amazing at clumping, which also means (in my opinion) less stinky litter smells from those bits you couldn’t quite get out since they didn’t clump. You also use shockingly less litter than you might think. Which means costs aren’t close to as high as you might imagine, you have to purchase litter less often (I don’t know why I find it so annoying to online or store shop frequently for the same item, but I do), and it’s easier to store what you need in small spaces (I absolutely cared about this a tonne back when I lived in a studio flat with Thomas and Avery in the UK).

They’re nice because they’re biodegradable – they don’t stain your cat’s feet (if you have a cat with white paws + walnut litter, that’s going to happen) – they’re natural and for the most part smell quite reasonable, even unscented.

What these litters kinda suck at? Tracking. But I have a pair of top entry litter boxes, one white and one black Modkat Litter box (review up here), so I don’t really mind. Also I feel you get at least a little litter tracking no matter which litter you use. Heck I even tried pellets and those come out the front of a covered, flap litter box when I tried that type of litter. It’s also a lot less annoying to deal with if you have the right tools, like a quality litter mat.

But back to the corn litters for cats – I absolutely have read of a few issues with some. Problems that may crop up, based on what I’ve read, include: moths, mold, and insects, but I feel that if you keep an eye out for moths (never happened), have a close look for mold (again, never seen it in the litter), and truly you would probably notice any insects (yet again, not once), both when you open the bag and when you’re scooping out the little loos each time, you should be absolutely fine. You may also want to keep your litter box out of really humid places, like a bathroom if you take hot baths and your entire bathroom gets steamy during bath time. I have a feeling that would reduce the chances of issues cropping up with mold, for instance. But I have no firsthand experience with this as I haven’t ever placed my litter box in a bathroom I shower in.

Enough of my preamble that has obviously gone on much too long already – let’s get into the corn cat litter options! 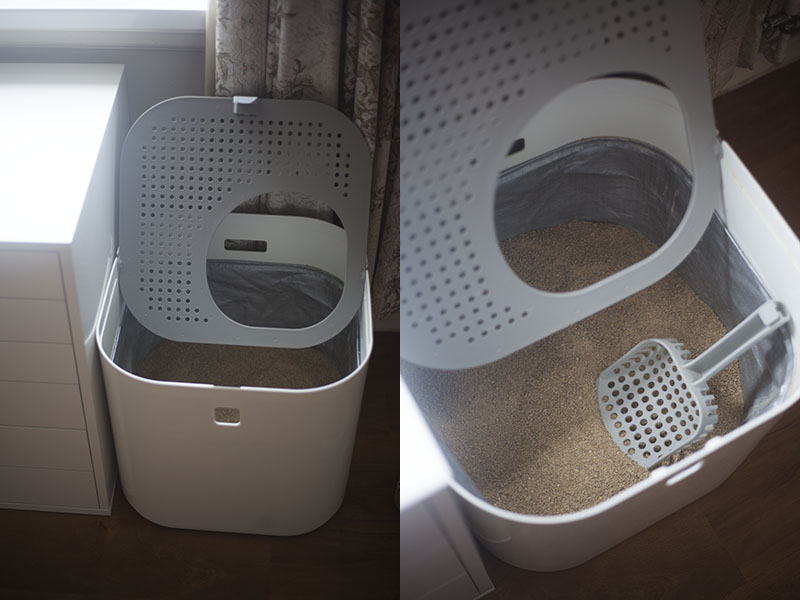 There are other World’s Best Cat Litter formulas – Original, Lavender scented multi-cat, Zero Mess, & Pine Scented Zero Mess – but this is the one I personally use and love, so I chose it to feature here in spot number 1. Considering just how much I love this litter, and the fact that I’ve tried a number of others and really hated them by comparison, I do believe I’d be hard pressed to find one I’d like better.

This cat litter is made of cedar, pine, and corn, not just corn alone, and seems to get a lot of glowing reviews from pet parents. I really want to try this one, and it’s the only litter on the list besides World’s Best I think I may actually really like to use. Some say it’s really great for odour control, but poor at clumping compared to alternatives, so I’d definitely stick to World’s Best in theory. That’s because Avery doesn’t create odour problems in the kitty loo but he does dig a lot, so I’d prefer a stronger clump if/when possible. I’m still curious to know how it stacks up, however.

This is one litter I feel I’d love to try out as a direct comparison to World’s Best Cat Litter, since it seems to be a similar formula, and is made pretty much exclusively of natural corn cob. The feature it brags that I’m curious about: apparently it’s pretty dust free? I don’t get much dust with World’s Best, so I’d love to know what mostly dust free looks like, and if it’s pretty similar to what I’ve already got. I’d assume it’d be like World’s Best in the clumping department – and if it is, it will clump very well. Absolutely worth a shot in my books.

I’m really curious about this one. It’s meant to be used with the Litter Maid automatic self-cleaning litter box, but I think if I were to consider grabbing the self-cleaning box I’d test out this litter in advance to make sure I liked it. Though I’m sure it’d be fine to use the World’s Best Litter formulas in the LitterMaid if I didn’t like this particular litter.

Apparently pet parents are sometimes put off by the smell of this cat litter, so be aware of this and maybe try going in to a store to take a whiff of it before buying. If you’re okay with the smell of the litter itself, I have a feeling this particular litter would do a better job covering up the smells of kitty #1s and #2s. A really popular option, though the reviews do seem mixed primarily because of the initial like or dislike of the actual smell of the litter.

One reviewer mentioned this corn cat litter is “Good for clumping and urine odour control, but not for flushing or for covering #2.” Keep that in mind. Since I don’t flush at all, and this litter is still 100% biodegradable, I do think it’s up my alley. It’s just not at all easy for me to get a hold of here in Europe, so not quite the simplest litter for me to use.

This one is not widely known, but it looks really interesting to me, as it’s the only corn based cat litter I’ve seen that’s pellets instead of loose litter. I have a feeling this would reduce dust quite substantially and maybe even tracking. Looks like a lot of reviewers are happy with it for those reasons, as well as its odour control and clumping ability – what more could you want? 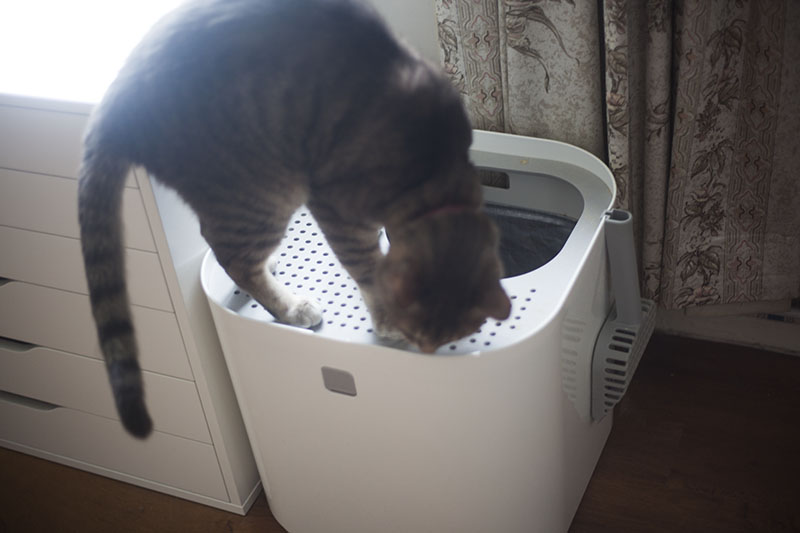 Your Thoughts on Corn Litter for Cats?

What type of litter do you use at home? Are there some types of litter you prefer over others?

Would you ever try corn litters for cats? Why or why not?

If you use one already, would you recommend the brand and formula you use? Would you like to try a different one? Which looks best to try to you?

Looking forward to reading your thoughts in the comments down below! 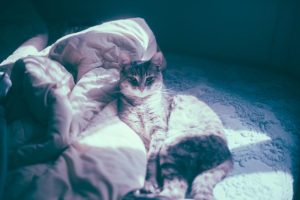 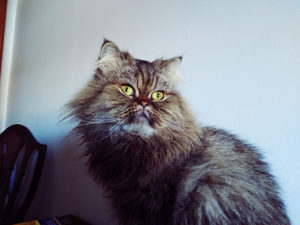