There’s really only one real reason to be interested in top entry litter boxes: you don’t want to have to deal with so much mess when it comes to litter.

Right now, I don’t live in the biggest apartment ever. Actually, that’s an understatement. I live in a studio flat with my husband and my cat. Both my husband and I work from home, and so when things get messy around here, it’s not fun.

You know those cats that will politely wipe their paws on the litter mat in front of the litter box every time they’ve finished doing their thing? Yeah, not my cat. Not ever. Cool with me, though, because it just means I have to be a little more clever with litter box selection – and litter selection for that matter.

It’s not the easiest thing to try to explain, and if that made no sense to you, I’m so sorry, but basically I’m guessing that if you’re here, chances are very high you already know the benefits of a top-entry cat litter box and were just here to see what my picks were. So let’s get into that! 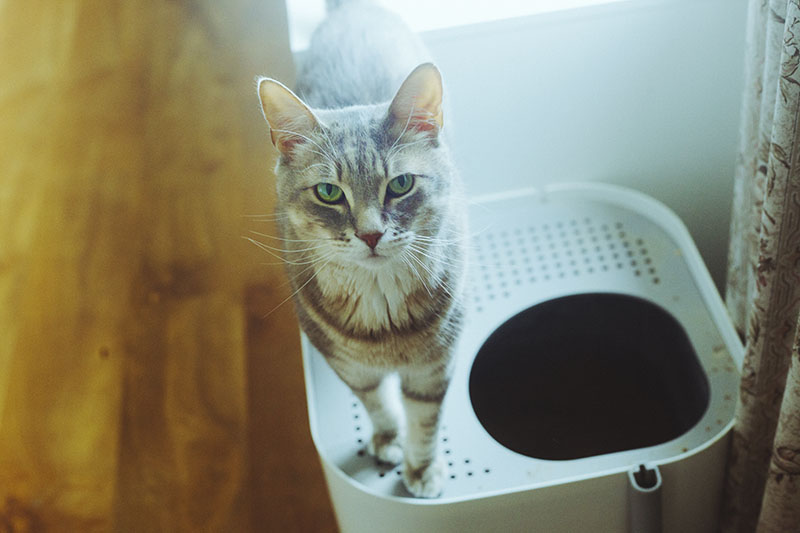 Edit 2019/06/19 – This top entry litter box wasn’t around when I was first considering switching, though I absolutely, 100% would’ve grabbed one if it was available when I was. The IRIS filtered lid boxes are stupid affordable, they’re crazy well thought out, they’re lightweight, making them easy to move around if you ever need to change up where your litter box for the day or take it to a cat sitter’s house. Highly convenient for that actually seeing as how the litter never spills out at all, and considering I keep certain areas of my house closed to the cats now that I have a big house, I think this would come in handy now.

Oh, and it’s stunning. And it comes in a slew of colours so you’re really likely to find one that suits your tastes and/or matches your furniture if it’s up your alley. I’m mad that they’re not easy to get in Europe – but once they get here I absolutely positively want-one-so-bad. Awesome product, and in my opinion the perfect example of a company jumping on a trend to create a product that others have been selling a lot of, but putting their own twist on it, bringing the quality up a notch, and keeping the pricing low? I honestly think IRIS nailed this in every way shape and form.

This one deserves to be high up on the for a couple very convincing reasons: 1. It’s not actually too bad looking at all, and (most importantly) 2. The price is great. I actually think the Petmate Top Entry Litter Pan looks loads better than many top-entry litter boxes up there, though absolutely not as great as the IRIS.

This is one of the ones I meant when I said that option #1 was prettier than competitors up to 2 times its price. I actually think that although this one looks a little nicer because it’s monochrome, overall it’s not actually nicer looking than the Petmate one – seriously don’t know if anyone will agree with me here, but yeah, definitely between the two budget options, I think the Petmate is the obvious winner.

Still a really great option, though. I don’t consider it to be poorly priced at all.

One thing to note is that with this top entry litter box, there aren’t holes in the top part, so you might have to do a little more clean up. Though so easy – just pick up the lid and tilt the excess litter straight back into the litter box and you’re done. Boy do I love top-entry litter boxes! Because of the way this one’s lid is made it might actually catch a bit more of the stray litter that catches onto your cats paws, though. Would love to test it out versus the Petmate one myself to see the difference firsthand.

Sadly for me, there are a lot of products available on Amazon.com that really aren’t available on Amazon.co.uk. This is one of them. I saw this litter box and actually probably would have bought if I’d seen it on the UK Amazon. Too bad in one respect (it’s a good deal in my opinion), but not so bad in another because I actually love the litter box I ended up with so much!

Basically, this in my opinion is the cutest darn option you could buy at this price point. It’s sleek and modern and for some reason reminds me of Hello Kitty. Not sure why I get those vibes, maybe it’s just the fact that I’m associating it with cuteness, but either way. The styling of the top of the litter (those circles = <3) + that little paw print button! All at such a low price point? Yes. I would have been sold. White + cream is standard, and definitely what I would have gotten for my all-white flat, but that orange is hella cute, too with those with more colourful rooms!

This is actually the one I bought (yes, I know, you’re not surprised because you saw it in my pictures – duh!). I was sooo close to buying Modko’s Modkat Flip Entry Litter Box instead of this (because both are pretty and match the all-white furniture in my house).

Not going to lie, it was the price that made me really reluctant to try this product. Coupled with the worry that it wouldn’t be durable – that the lining in the box wouldn’t last, that my cat would be pretty aggressive with jumping in and out and would break the box or the lid. Oh so much worried me because that huge price tag meant I couldn’t easily replace it.

What put me at ease? They sell individual liners in case the lining tears. And my husband told me that if the top part broke (I was genuinely concerned it would!) he could DIY a new one very easily. So I made the buy.

Well, it’s been pretty much a solid year and the liner is still chucking along in looks-like-new condition, there’s no visible signs of wear on anything – the lid, the box itself, the scooper (why that would show signs of wear, I don’t know, but I thought I’d list it as well anyway!). It’s helped so much with the clean-up process, it’s strangely enough made cleaning the litter box way easier than a side entry litter box.. oh there’s just too much I like about it, though of course the way it looks 100% takes the cake.

But enough! If you’d like to read more about this litter box, you can check out my review of it here.

Edit 2019/06/19 – Honestly, I love this thing so much I bought it in black, too. Black is my new favourite colour it comes in. I think I might get the grey one as well (can see it looking nice in my office!). Yes, I’m crazy, but the cats love them, I love them, they’re seriously fab. 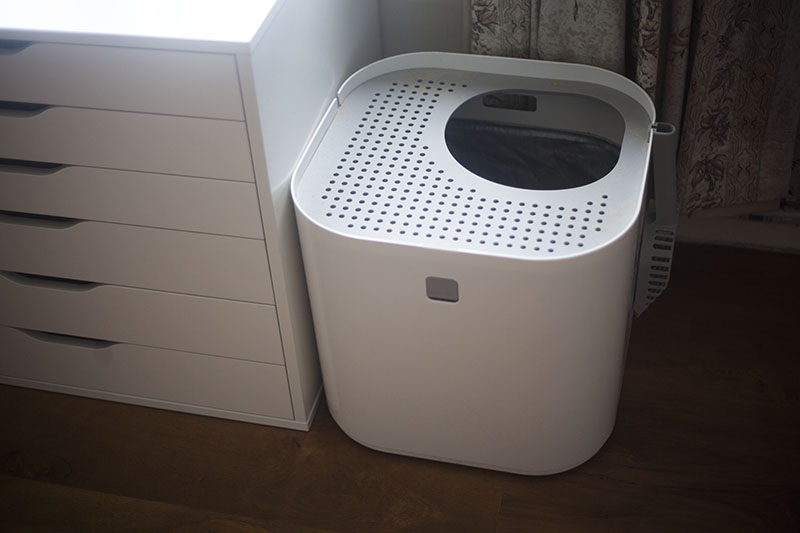 How I Feel About Top Entry Litter Boxes Now

All in all how do I feel about top-entry litter boxes now that I have one myself? Would I make the purchase again?

I just have a really messy cat when it comes to litter boxes and so I find it important to have a good litter box and/or a good litter because clean up used to drive me nuts. Having a happy cat in a small apartment is not the easiest thing to do without litter issues driving me up a wall. Now, with the Modkat Litter box, I’m only driven nuts around a tenth of the time Avery goes – because let’s be honest, my crazy cat once in a while still finds a way to leap over the box and completely disregards the fact that he’s supposed to go on the top part before even a second before leaving. Yeah hes a special snowflake..

Nonetheless, it’s still considerably less clean up than before.

And I know that if I want to get clean up down to little to nothing, I could probably do so with a different litter. Specifically, a walnut based litter like the Blue Buffalo Naturally Fresh one I used to use when I lived back in Canada that’s unfortunately not easily available here in the UK. Right now I’m using World’s Best, though, which I love because it keeps cat-pee-smells to a minimum (you can see my review of it here). Not sure about making a trade off considering I’m okay with what little clean up there still is to do with this litter.

Would I have bought a different top-entry litter box if I lived in a bigger house? Maaaybe. (Edit 2019/06/19 – Nope; now in a house with two cats and grabbed a second Modkat in black; also want a third in grey 😉 ) (Edit, Edit 2019/06/20 – As I mentioned earlier, just bought my third Modkat in grey this morning; I will now have all 3 colours! I promise I know how crazy I am.)

If I had to choose something else it would absolutely be the first option, the IRIS Filtered Lid with Scoop Top Entry Litter Box. So affordable and so super cute.

Being frank, if I have the budget, once I get a second cat I may just get another Modkat top entry litter box because of how much I’ve loved the first. Maybe in black if I have a room with some black furniture, or for a washroom with tuxedo black-bottom/white-top tiles. (Edit 2019/06/19 – Funny looking back and seeing that I wrote this! Since I actually did).

The Modkat top entry box is stylistically so far superior to the others that it’s hard for me to say I would choose anything else if the price tag wasn’t an issue. And considering it lasts so long without breaking or wear, I don’t really mind spending the money on a second. 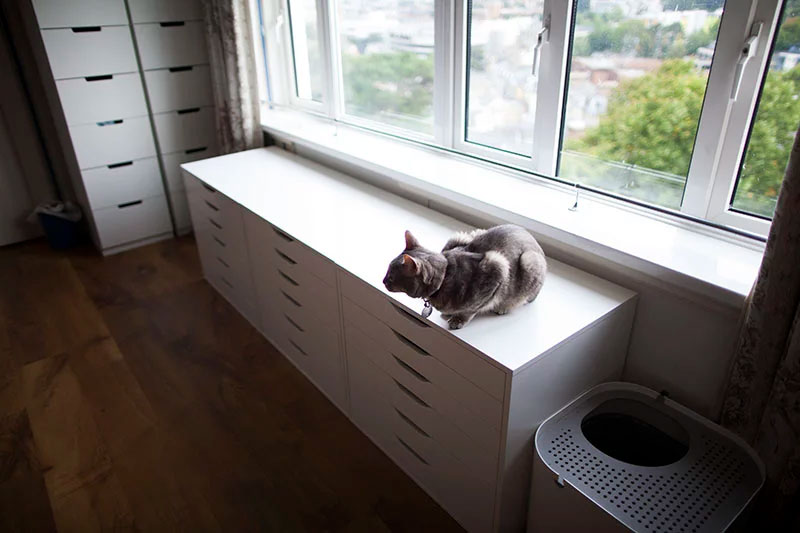 Picture from post Home Tour: Our Flat is Practically an Ikea Showroom

Enough out of me, let’s hear from you!

Have you used one before? Which did you buy? How did you like it?

Have you thought about buying one? Any concerns? (PS – if your concern is you’re worried about your cat being able to use one, check out this article on top-entry litter box training).

Let me know your thoughts in the comments section down below. 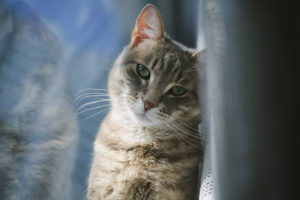 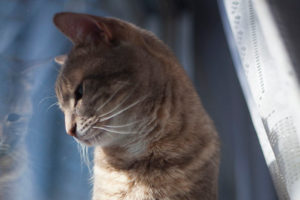 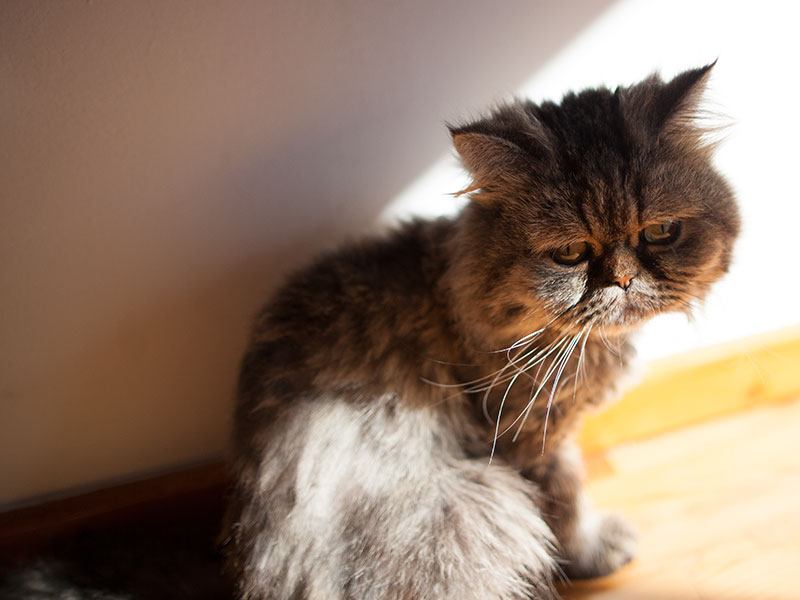