There’s a fact about cats that’s very well understood by we-who-have-cats-in-our-homes: they sleep a lot. And no, I don’t mean sleepyhead human quantities of sleep for around 10-12 hours in a day. Cats will often sleep 16-18 hours every single day, and that’s perfectly natural and completely normal for them.

Yet no matter how well we understand that a cats are behaving in a perfectly natural, healthy way when they sleep so much, many of us still wonder: why the heck are cats so lazy? It can feel a little extreme.

Looking at their larger relatives, like lions and tigers (not bears, oh my!), gives us a good hint, so let’s start there. 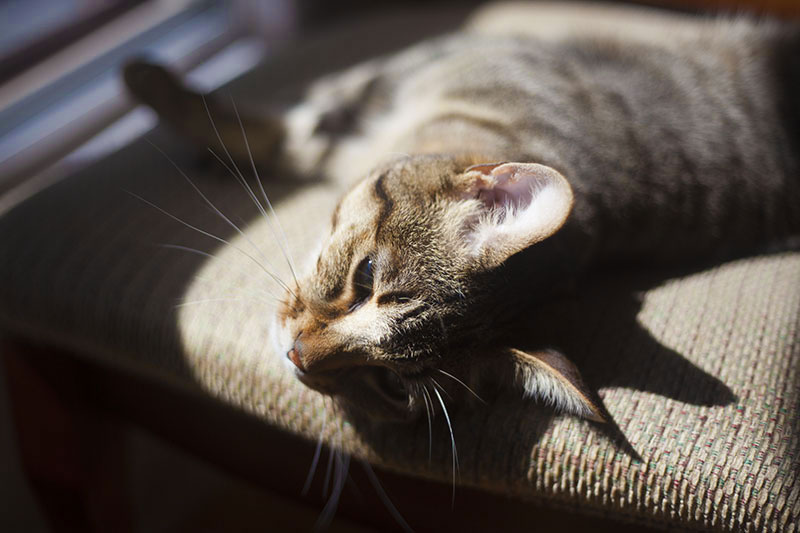 Part I: Why Wild Cats Are Lazy

Been to a zoo a number of times? Checked in on the lion or tiger pen? Ever seen one of those large, gorgeous creatures out and about? Chances are, unless you’ve managed to drop in during feeding time, you’ve probably only ever seen one of these attractive beasts snoozing or hanging out lazily in the sun.

Remind you of your own little feline at home? Well your house cat and these wild cats are more similar than looks alone may suggest.

Why do lions sleep so much? Why to tigers sleep so much? And what on earth does that have to do with house cats sleeping for 16-18 hours a day and being so overwhelmingly lazy?

Ever watched a nature documentary of a lion, tiger, panther, or any other wild cat hunting? Those felines really do expend a lot of energy catching their prey. They run shockingly fast, pounce like nobody’s business, and overall have to do quite a lot of strenuous exercise, expending massive amounts of energy while attempting to catch dinner.

Once wildcats have hunted down their prey and filled their bellies – what’s left for these cats to do is, well, conserve that energy until the next hunt. Hence all the sleeping. The lack of activity. The laziness.

Wildcats are like high quality modern day cell phones. When cell phones are actively in use they use up a lot of juice. They need that increase in energy use to do what they’re supposed to do, to function properly. When cell phones are no longer actively being used, say after you lock your phone, they’re essentially in sleep or standby mode, and won’t use up very much energy in this state at all. Anyone who’s ever had a phone die at an inopportune moment knows how important it is for cell phones to do this because it means that energy is conserved when the phone isn’t needed, so when battery power is needed again, there’s energy there to be accessed.

A wild cat needs less energy if it’s still and sleeping, and thoroughly unwilling to put effort into anything throughout the day. When it’s time to hunt, that’s when all the energy does and should kick in. Because that’s when it’s important to up the anti. Otherwise that wild cat is never going to be able to outsmart, outrun, and finally catch its prey, and that means no dinner, and no more energy for that poor wild cat – which could result in a very dire situation for the wildcat indeed. 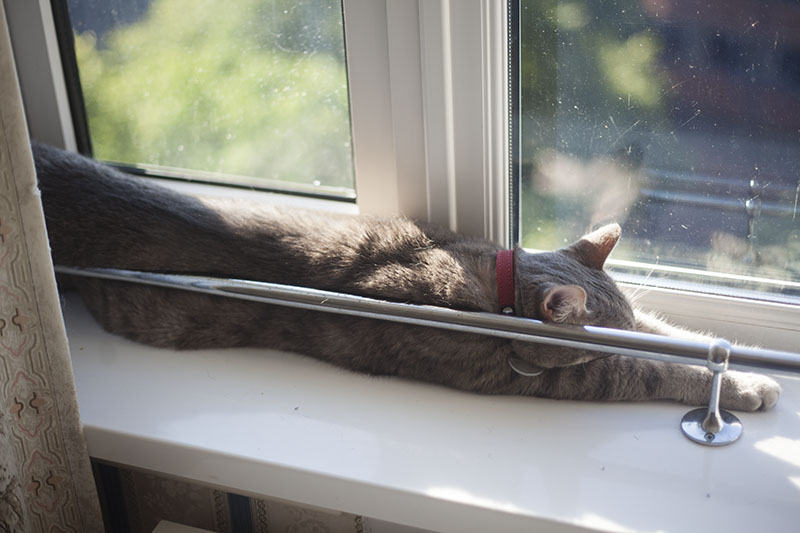 Part II: The Evolution of a Cat’s Conservation of Energy

Imagine there were only two male lions in one specific jungle:

The first: Spent tonnes of energy on the hunt, managed to stalk and snag his prey, eating his fill and feeding his pride (his group of lions) in 5-6 hours, then spent the rest of the day (17-18 hours) lazying around and snoozing.

The second: Spent equal amounts of time and energy on the hunt, but after snagging and eating his prey and filling his pride’s bellies, wandered around for 7-8 hours. In that time he spotted some cool jungle birds, watched a fight between a couple of monkeys, broke it up by scaring them with a roar, almost stepped on a python – let’s just say he had a fun, full day. He wasn’t really lazy at all, except for the remaining 11 hours, which he slept through happily.

Who has the most energy at the start of the second day? Obviously the first lion.

And this effect would be compounded over time. The lazy jungle cat will always have more energy than the non-lazy jungle cat. Because he doesn’t “waste” any of his energy on activities that don’t get him food. He conserves his energy outside of hunting time.

Now let’s imagine, one month in, there are slim pickings for the poor lions. It’s hard to find grub for some reason or another.

Which lion is most likely to snag dinner and feed his and his pride’s bellies? The lazy lion. He has more energy conserved and thus a better chance at hunting well and successfully.

What happens if a month goes by before food starts being easier to get? In that time, the lazy lion not only catches more meals because he has more energy for expending at hunting time, but he also needs less to eat because he isn’t using all his calories on wandering around doing things all day.

Now imagine that, unfortunately, the harsh month meant one of the two lions didn’t pull through. Is it any question which lion survived? No. The lazy lion is obviously the lion that managed to pull through. Which means the lazy lion is the one who was able to live long enough to have his own lion cubs, and those little lion cubs (surprise, surprise) turn out just like their dad and are exceptionally lazy jungle cats as well.

If there’s an incredibly abundant food supply, all the cats, lazy or not, may survive. But when times get tough, it’s the non-lazy cats who will struggle the most. If the non-lazy cats don’t survive, they don’t have cubs, and without children of their own, their non-lazy genes don’t make it through to the next generation of the jungle’s lion cubs. 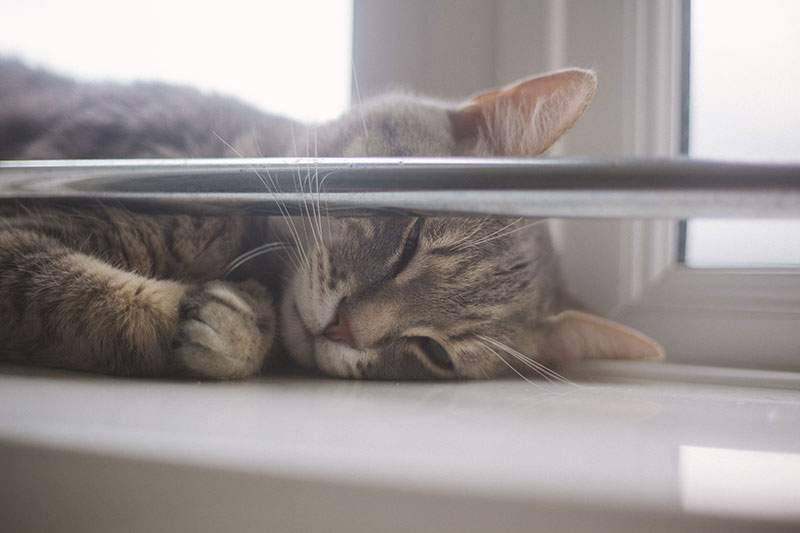 Part III: Wrapping It Up

So why are cats lazy?

Cats are lazy because it helps them conserve energy, meaning they have to eat less, and meaning when it’s time for them to hunt they will have more energy to expend to successfully be able to snag their prey.

Lazy cats, ones in the jungle or ones in our own homes, have the upper hand when times get tough and it’s hard to find food. They need less calories, they are able to use up more calories on running, jumping, and pouncing to catch their prey when it’s time to hunt since they’ve saved up calories throughout the day resting. Thus, if it comes down to a lazy or a non-lazy cat making it through a tough time, a lazy cat will be the obvious survivor.

Sure, it’s true that house cats don’t have to hunt anymore. So yes, technically, they don’t need to be so lazy anymore. Actually, it would probably benefit them (since we feed them so stinkin’ much!) to get a little more exercise in. But our lazy cats are this way because they inherited lazy cat genes from their ancestors, who survived hard times specifically because they were so darn lazy.

It’ll take a long time for that kind of inherited familial trait to change!

And thus the excess snoozing amongst house cats continues… 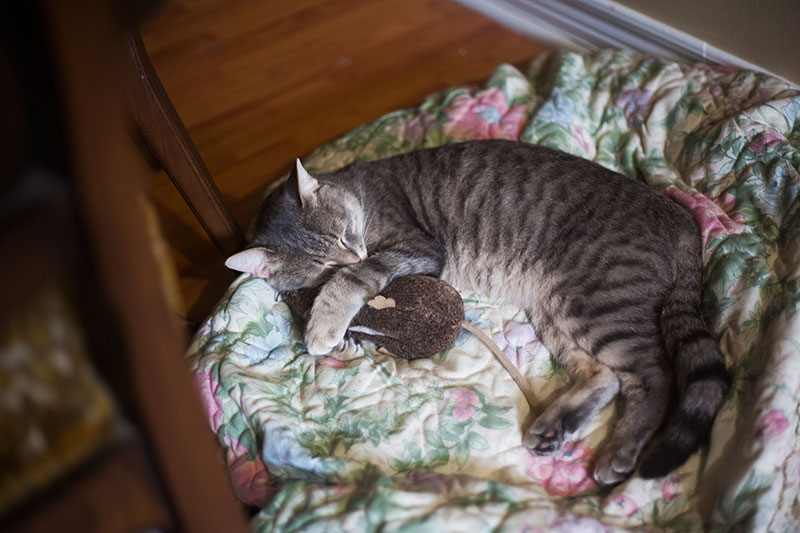 What Do You Think About Cats Being Lazy?

Personally, I find it incredible that cats have found a way to survive being so stinkin’ lazy! I almost wish humans had evolved to be the same way. Sleeping, resting, and relaxing for the vast majority of the day and working for only short bursts of time? Sounds like an ideal life!

There are obviously times I’m driven crazy by my cat’s laziness, particularly when I can’t get him to play! But times like that I should probably remind myself: if it wasn’t for laziness – Avery’s ancestors may not have survived harsh times long enough for them to have kittens, and thus I wouldn’t have ended up with the lovely pet I have today. Besides, laziness isn’t bad all the time, especially when it means more snuggles while watching Netflix on the couch!

What do you think about cats being lazy? Do you think it’s alright, would you prefer cats not be so lazy?

Do you think it’s pretty cool that a trait like laziness has been passed down so far down the line, essentially out of necessity?

Do you wish humans could have evolved to be lazy out of necessity, too? Tell me your thoughts in the comments! 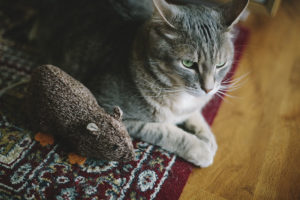 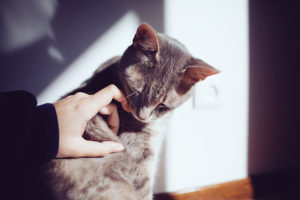 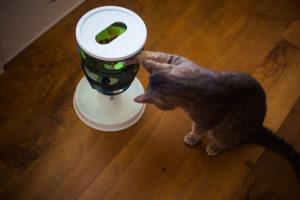