When I say my cat is lazy, I mean laaazyyy.. He’s not a big fan of anything besides napping, and even when he knows he needs exercise (and I know he knows because he whines at me to play!) he’s still not willing to put the effort in to get started himself. 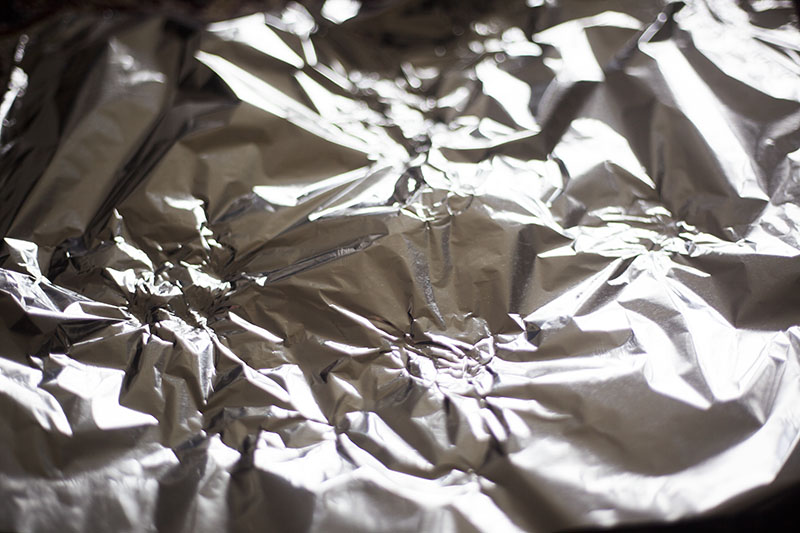 It might sound like I’m exaggerating, but I assure you I am not. Once, my father took it as a personal challenge to get Avery to play with him when I knew Avery wasn’t in the mood to play – my father tried for an hour or so straight, no go. This cat is legitimately the laziest thing you’ll ever see in your life.

I’ve written a handful of articles on this blog already about lazy cats, how to encourage them to start playing – all that jazz – and I’ll likely write countless more. “Write what you know,” right? And boy do I know my lazy cat.

My point in telling you all this? It’s hard enough to get my cat to play with me. To play by himself – that’s a whole other ballgame. It’s seriously pretty much a miracle whenever my cat swats at an object for even 2-3 seconds by himself. And while it’s the kind of thing that rarely ever happens, and I really do mean rarely – maybe once or twice a month? – the aluminum foil ball is, to date, the only cat toy I’ve ever DIYed that he’s actually bothered to play with himself. Ever. 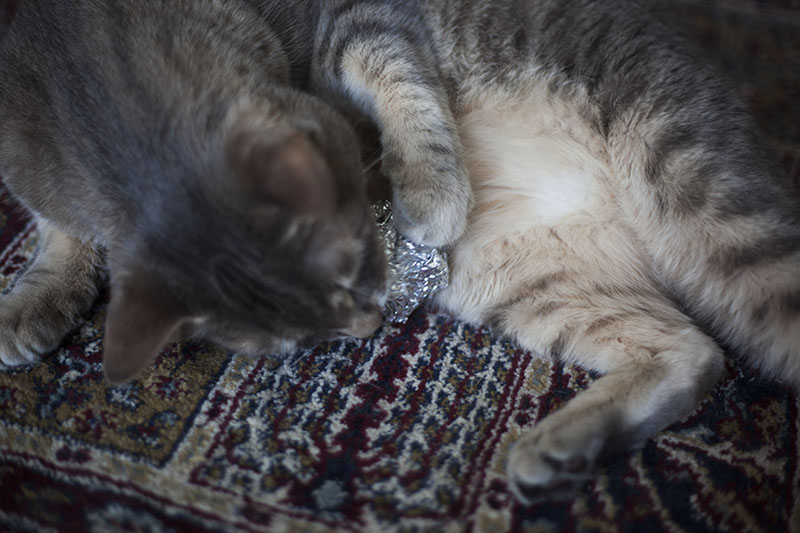 I often wonder if Avery happens to like a specific toy just a little if those are the kinds of things other cats go crazy over. So pretty much, I’m wondering how your cats at home feel about aluminum foil balls. Do they love them? Engage a little bit? Are they one of the only things they’ll play with by themselves or will they only play with them when you’re rolling ’em here and there?

Never made one? Give it a shot. How is pretty obvious, but I’ll do a quick 2-second rundown anyway.

Take a piece of aluminum foil – 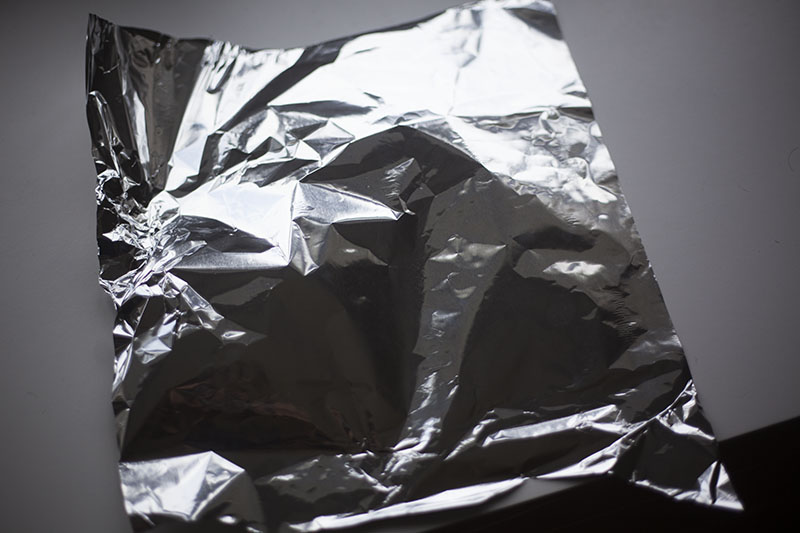 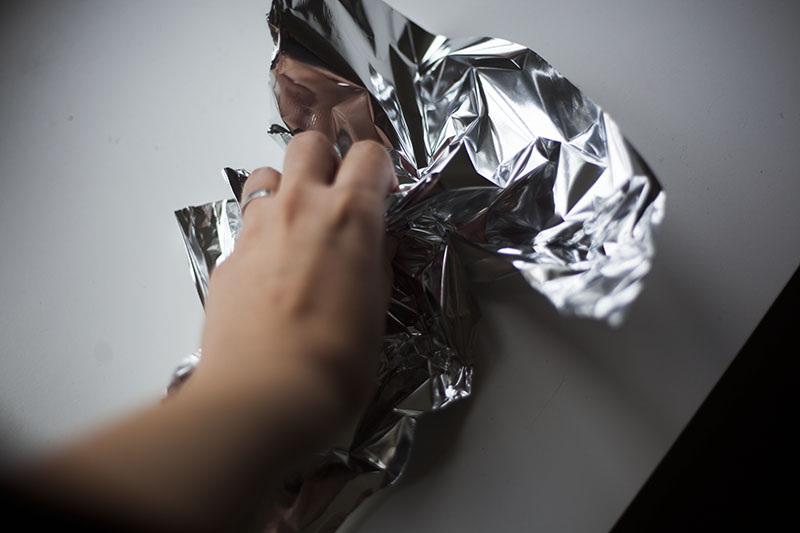 And make it into a ball. 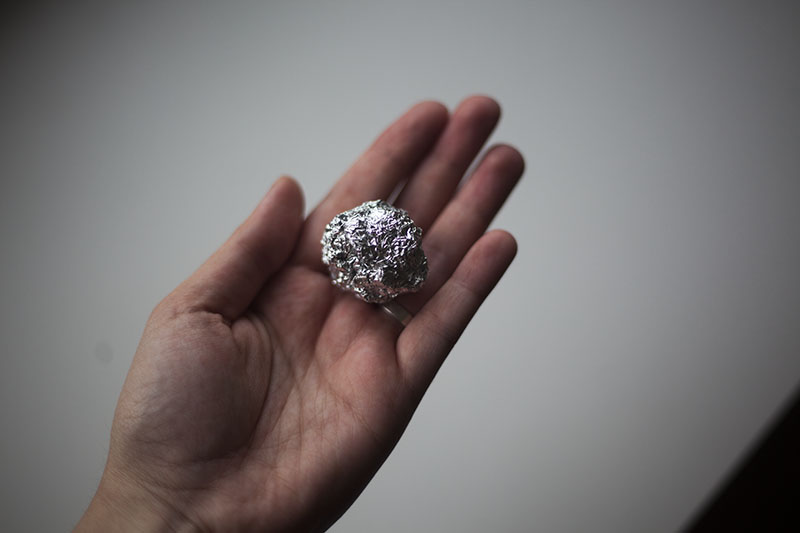 Yup, that simple of course. You can decide whether to have the ball very tightly packed in, or if you’d rather, it can be less packed and bigger. You can have a number to see which your cat prefers.

Ironically, my cat seems to prefer the variation of this DIY that’s not “on the menu” so to speak. He likes the pancake sitting at the end of this photo that resulted after an accidental squish when I stepped on it with slippers on – 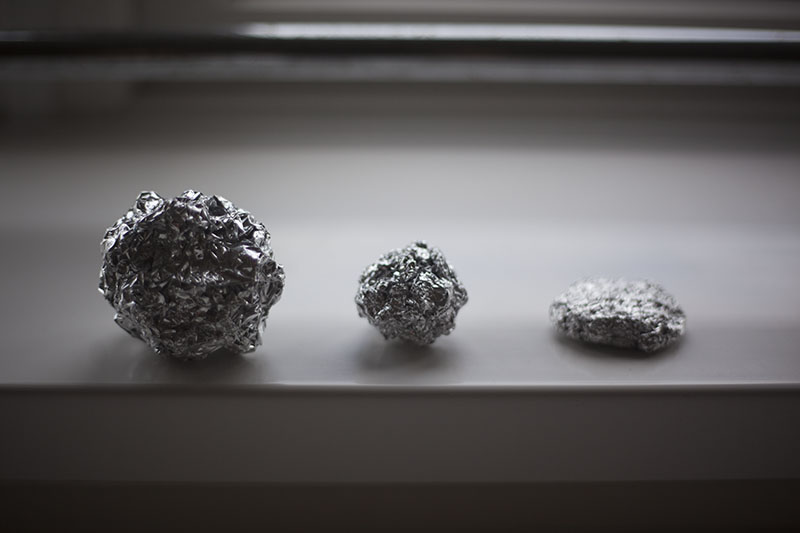 Ridiculous, I know, but he’s a Canadian cat so maybe he’s just really into hockey & pucks.

Anyway, to get pictures of my cat for this article, playing with a toy he’s supposed to be the most interested in playing with by himself over all other home-made cat toys I’ve made yet, I obviously have to call the cat over.

I wait until he’s in a “playful” mood. How do I know he’s in one? Because he’s the one who called me into the living room to play by meowing. Okay great, so I have a cat who knows he wants me to engage him in play time. Time to call the fella over to the carpet where playtime happens.

He ignores me, actin’ all cute and pretending he doesn’t hear, then eventually, when he hears the crinkling of the aluminum foil, comes over to inspect and figure out if anything interesting is happening. 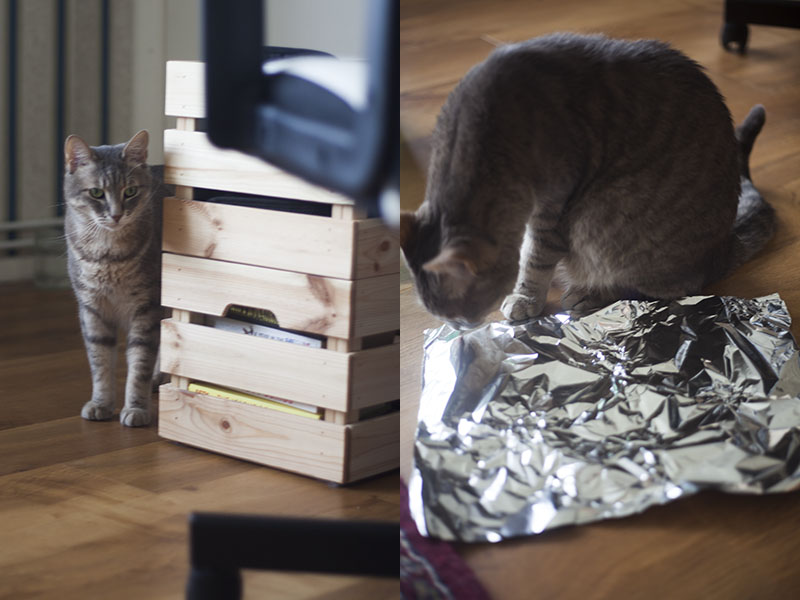 Oh and STARES at the ball when I pass it to him multiple times. Nothing else. Great kitty, thanks for this – at least you bothered to come over after ignoring me. That’s some initiative. 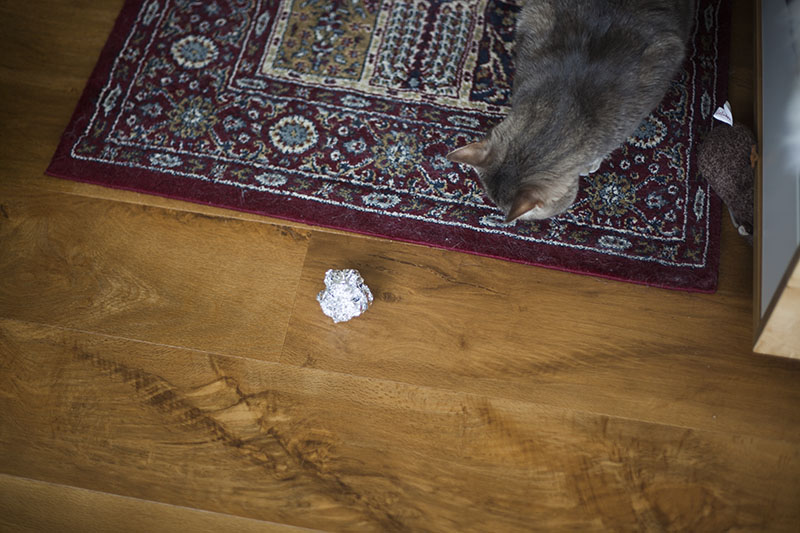 With enough prodding, you know, teasing with the ball for around 5 solid minutes, I actually manage to get the picture below, and a couple other “action” shots of him playing. But don’t be deceived, he really is lazy, I do promise you that. Genuinely, he played for about 20 seconds, tops – even after another 10 minutes of me trying to get him to engage with the aluminum foil ball. 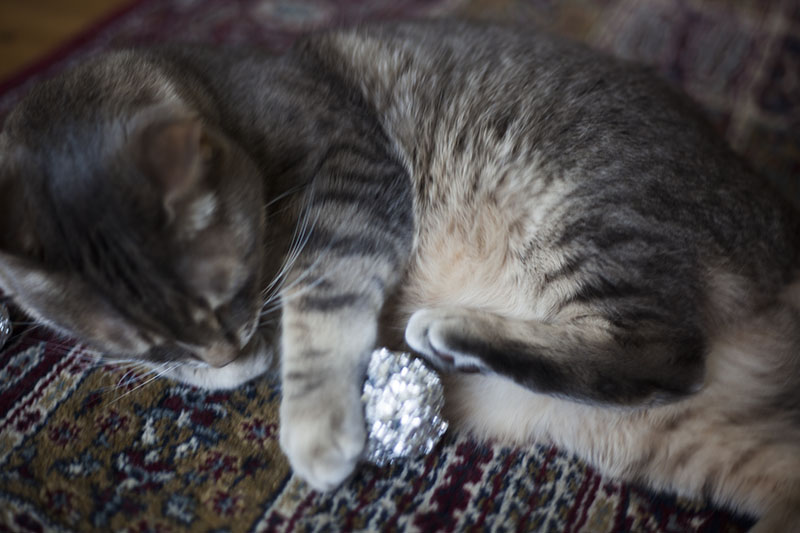 Eventually I just give up, and take a few pictures of him posing with all the variations of the aluminum foil ball. If he looks crabby, that’s not because he’s annoyed. Trust me, he’s actually just a grumpy old man inside; that’s his regular face. 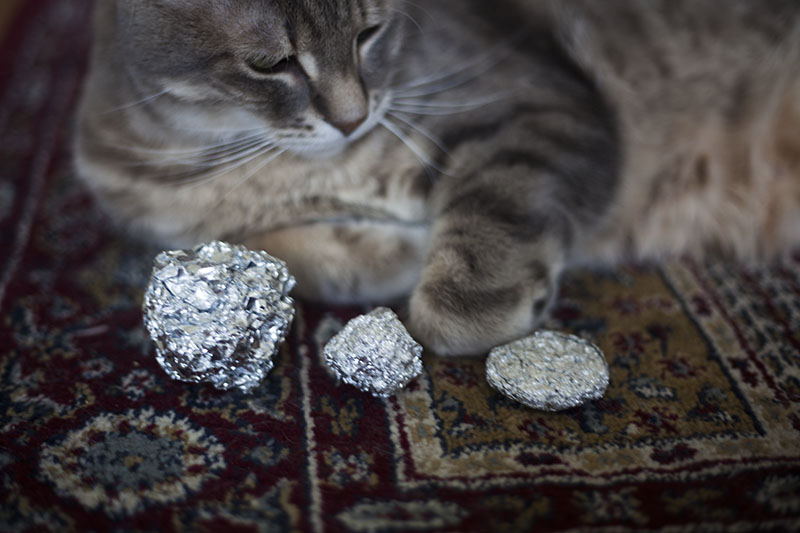 After a few shots like that, I go back to attempting to get him to play. To which – 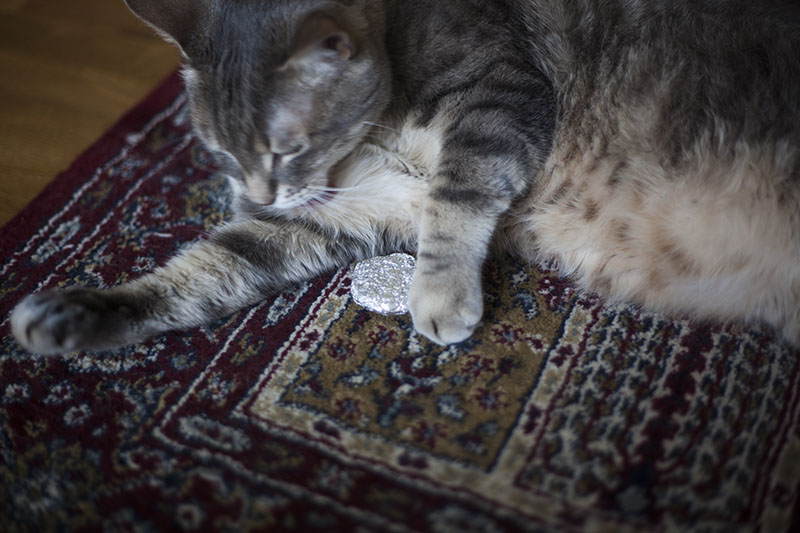 Ah yes, so bored of my attempts to play with him that he actually starts to clean himself.

I finally give up. Go to upload the pictures to write up this post, and about 2 minutes in, I hear the crinkling of the aluminum foil – he’s poking the roll. Then another minute or so in, he actually starts kicking the “pancake” once, twice – about three or four times in total.

Of course, kitty. Never for the camera. 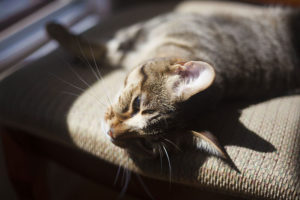 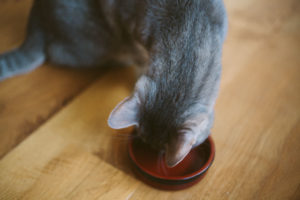