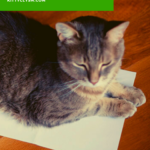 As cat owners, we’ve nearly all had it happen to us.

You’re filing a phone bill, reading a letter, or taking your essay out of the printer, and just so happen to place the pages on the floor. Out of nowhere your cat, who had been half-in half-out of sleep, dozing off in his comfy spot by the window, checks you out. A second later, he stretches, waltzes on over, a look of determination in his eyes, reaches the paper and places a single paw, then another, and finally plops himself right down on top of your pages. Seconds pass, and deciding you’re probably okay with him being there (else you would’ve moved him by now), he decides to full on flop, lying down for yet another cat nap. All this fuss over paper you randomly placed on the floor moments ago.

Why on earth do cats like paper so much? What makes cats essentially obsess over it? What about loose leaves of the stuff seem to call out to cats, not only grabbing their attention, but basically filling them with the uncontrollable urge to physically be atop that paper? Are all of our cats insane?

While the sanity of our house cats is up for debate, there’s no denying that this obsession with paper is just another one of those cat quirks we humans often find ourselves mystified by. It fits in well with eccentric feline behaviours like: sleeping pretty much all day long, kneading things and even people with their paws, hell even purring itself is odd enough to classify when you really think about it.

A definite answer stating exactly why cats like to sit and lay down on paper is unfortunately not on the table quite yet. Theories are all we have, but we’ve developed enough that I think, combined, they do a good job at explaining away this feline obsession. Some of these theories may be off base, others less so, but I feel confident you’ll find at least a few that will strike you as likely to be true. Let me know in the comments which theories you feel are better or worse than the others. 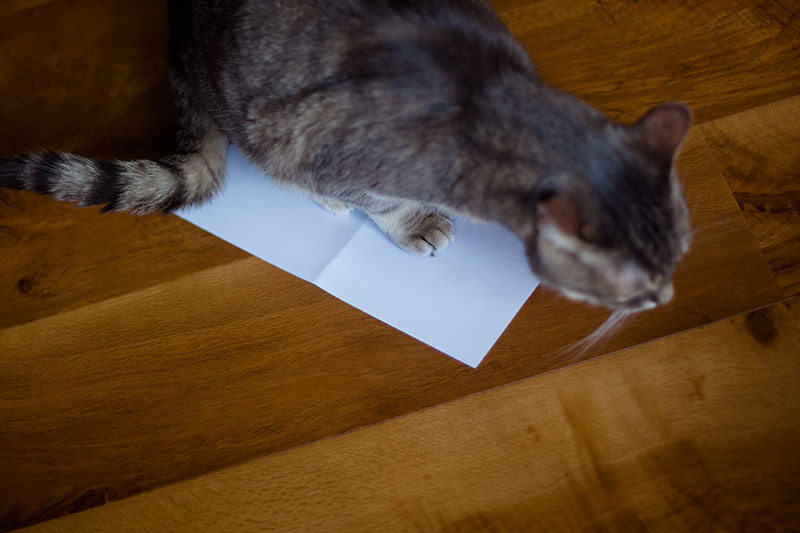 1. Cats like attention, and sitting on paper often gets them it.

There’s no question about it, cats really do love attention. And often, they know just how to get it from us.

Typing away at the computer for some time? Your cat may decide you’ve spent way too much time paying attention to that silly keyboard under your human paws and plop himself right on top of it. If you’ve spent considerable amount of time interacting with a paper you just laid on the floor, sitting on that paper could well be a similar attention-grabbing technique.

And even if you weren’t paying very much attention to that piece of paper at all, let’s be honest, a cat sitting or laying down all cute on a letter or a bill on the floor is almost always guaranteed to grab some from us anyway – generating an “aww” or two, a petting, or even a rush to our phones for a quickie picture. When it comes to snagging attention, cats know us all too well.

While this explanation may be part of the paper-love equation, I don’t think it can be the whole story. Why? Cats seem very content to sit and lie on paper even when humans are not paying attention to them; so on to another theory.

2. Cats are naturally curious, and are drawn to new things.

Cats love checking out new objects in the room: whether the new stimuli is seen, felt, heard, or sometimes even tasted.

Since paper on the floor is often something that’s new and doesn’t particularly belong, it’s no wonder it attracts cats in the first place. What feline could resist taking a peek at something so quiet, still, and non-threatening? Cats may be drawn to paper lying on the floor in large simply because it’s a new object for them to inspect and “discover.”

Of course this doesn’t explain why they stick around, but it would explain why newer pieces of paper on the floor have more of a “pull” on a cat than a piece of paper that’s been in the same spot for a week.

What might explain a cat sticking around after first being interested in a new piece of paper?

3. It could be territorial behaviour – marking the new “spot” as its own.

By merit of lying on an object for extended periods of time, cats will naturally “bestow” their scent onto that object: just the same as our sweaters smell of us when we wear them for some time.

Cats are territorial creatures and as such, this theory makes a lot of sense.

To add what I think is quite convincing evidence in support of this theory – cats will often knead on the paper they’re about to sit on, and one of the reasons cats knead is because they have scent glands in their paws that release their own smell onto the items they choose to knead on.

The fact that the object is new (#2) coupled with this theory could quite honestly be almost all that’s needed to explain why cats are both attracted to, and desire to stay on paper by laying and even taking naps on it.

But not everything needs to be about territory. It’s possible that a lot of the attraction to paper has to do with pure enjoyment, like maybe… 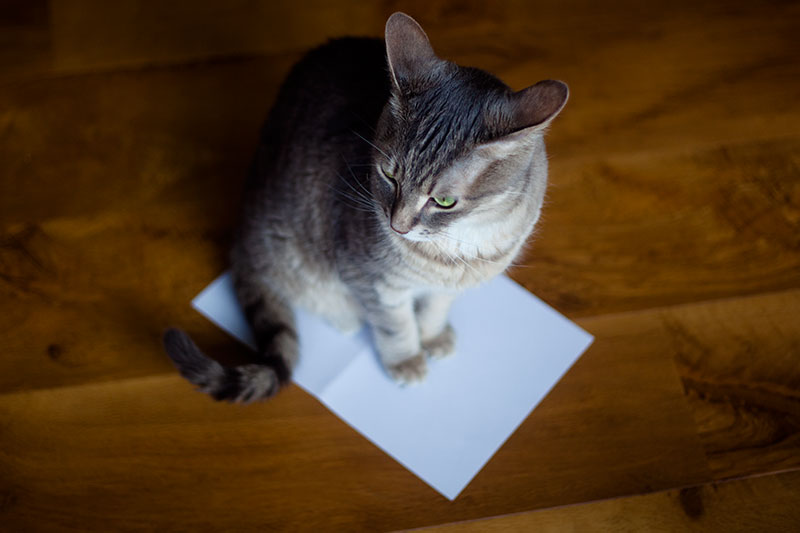 4. Cats enjoy feeling the sensation of different textures, and paper is one they don’t encounter to enjoy all that often.

Again, cats like new things (#2) and it makes sense that would include the sensation of novel, or at least different, textures on their paws.

This theory could help explain why cats would want to sit on a paper that’s not particularly new to the environment, as a cat could want to feel the sensation of the texture of paper on its paws just because it hasn’t felt that texture on its paw pads in a while.

This theory also helps explain the kneading in a different way – maybe there’s simply something lovely about the texture of paper that makes it desirable for cats to touch.

Obviously, this explains part of the initial attraction, and maybe why a cat will stand on paper, but not really why a cat will go so far as to flop over and lay on paper for extended periods of time. To give a non-territorial explanation for why cats may like to lie down on paper after having kneaded and stood with their paws flat on it, couple this concept with the idea that..

5. Cats could find paper particularly comfortable to lay on.

I mean, cats find stranger things quite comfortable. There’s really no accounting for taste, and when it comes to cats, they are quite particular about positions (like lying on their backs!) and odd spaces (like cardboard boxes?) they feel comfortable in.

6. Paper is a great insulator and is considerably warmer than most floors; cats may lay on it to be warm.

This is a great theory, and makes ever-so-much-sense, but in my opinion, it’s not enough to explain why cats stay on paper, although many cite it as their only explanation.

Why do I think it’s lacking? The issue with this theory as I see it: cats will often waltz over and flop down on paper even when it’s smack dab in the middle of a carpeted room! Carpet is obviously a perfectly good insulator and no cat’s going to get cold sitting on it, but adding just a little more to this theory makes it my top choice for being capable of explaining away the entire feline obsession with papeterie…

7. Cats evolved to like small, well defined spaces (which paper looks like) because outdoors these would typically be warm.

As mentioned briefly in theory #5, and as we all know to be true, cats love to be in cardboard boxes. The explanation behind why they evolved this liking comes down to two facts: 1. Sitting in them help make cats feel safe and more secure, and 2. Small, tight spaces like cardboard boxes help keep cats warm. Cats have essentially evolved to love small tight spots like cardboard boxes because, in the wild, if a cat was more likely to sit and stay in spots like this, he or she would have a better chance of surviving since these spaces provide a lot of security (away from the vying eyes of potential predators), and a lot of heat (which would certainly help during cold winters).

Think about the kind of space that would normally be small and well defined – maybe a small space behind a bush, a hidden hole next a pile of leaves. These places would typically mean the best type of security and insulated warmth for any cat outdoors.

Maybe cats love paper for exactly the same evolutionary reason they love cardboard boxes? Maybe to them, the small, visually defined space of the paper, creates an optical illusion of sorts that makes paper and boxes mentally nearly the same – a place to cats that’s likely to be both secure and warm.

8. Kittens were newspaper litter trained when they were young, and thus may like paper because it makes them feel secure.

This one I’ve saved for last because, while I’ve seen floating around the net quite a bit, I don’t really believe it to be true.

The issue as I see it is so many if not all cats like paper, and not all that many cats by comparison had been newspaper litter trained as kittens.

Strays and feral cats (like my own Avery), who were never litter trained at all, let alone with newspaper, are still attracted to paper. And obviously, there are so many pet owners who took in their cats as kittens and never used newspaper to litter train them; yet these cats too often love flopping over on paper left out in the middle of the floor.

Could it be that this theory is true and somehow cats who have had no interaction with newspaper previously in their lives have still somehow evolved to all have this kitten “childhood memory” association? Or is it more likely their obsession with paper is something more to do with one of the other theories? Let me know your thoughts down below! 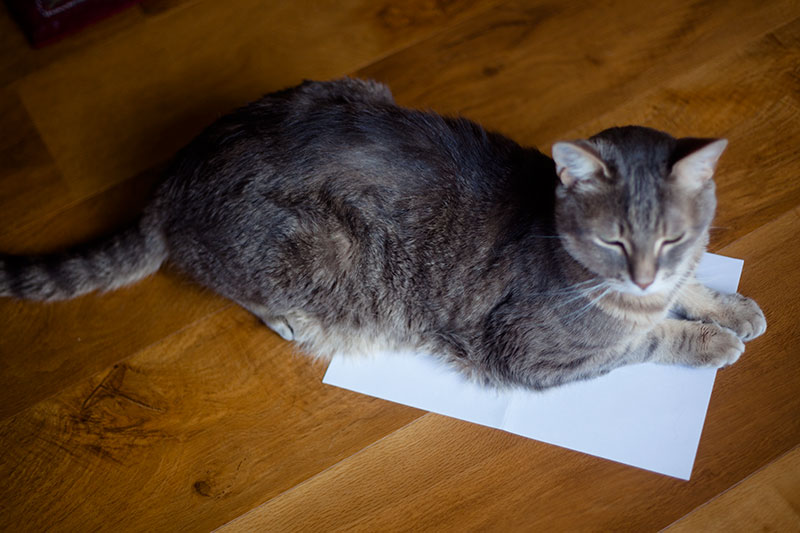 Your Favourite Theories on Why Cats Love Paper?

Did I miss any theories on why cats love paper you’ve seen floating around the web? Developed a theory of your own? Would love to hear it! Please share with me in the comments down below!

Looking forward to reading your thoughts. 🙂 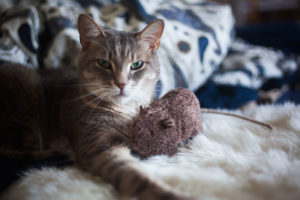 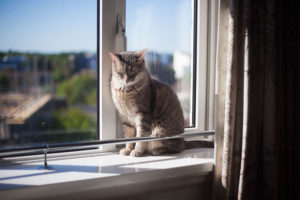