I’ve written about why some cats bite, then lick you before, but I do feel the act of licking by itself is quite a bit different from biting then licking your hands and fingers.

My newly adopted furbaby, Bjorn – a stray cat who just wouldn’t leave our property – is obsessed with licking. We learned this fact about him quite early on, ages before we even took him in, and his obsession hasn’t subsided yet.

He loves to nibble and gnaw on things so much we invested in a slew of cat chew toys to try out so he’d stay away from our poor fingers as well as dangerous things like wires, and keep his gnaw game for the fang-approved objects in the household.

While a lot of these he completely ignored (though other cats in our household who we adopted later actually adored them), I’d be lying if I didn’t mention our lick-loving kitty didn’t also love one particular type of chew toy: Matatabi Silver Vine Chew Sticks.

I have no idea if this is a common thread at all with cats who like to lick, however.

If you’ve got a cat who likes licking, do let me know if you’ve ever tried out these chew sticks as well and if your cat’s also been obsessed with them like Bjorn has proven himself to be.

When it comes to licking in particular, Bjorn more often than not licks the fingers on the hand I’m using to pet him.

He absolutely does lick me when I’m not petting him, however, and he licks other places, like my clothes, which he used to do much more often.

Bjorn I do find prefers licking while some positive bonding time and socialization is taking place between the two of us, so with him I know it’s not just a matter of my hands smelling of food!

That being said, I can definitely list my hands smelling as food as a reason he’s likely to lick, as well as a slew of other reasons, which we’ll get into later.

Sometimes the licking with Bjorn got to be a little too much for me to be happy. If I let him continue to lick for half an hour, he likely would.

Nowadays, I tell him, “Thank you!” and move my hand out of the way once I’m done, and he stops trying to lick.

Back when we first met, he definitely would continue licking even after I took away my hand, finding some other body part or a piece of my clothing to continue on, but he’s developed an understanding of my behaviour over time.

I’d recommend having a “trigger word” like I’ve used “Thank you” to tell your cat what he or she’s doing isn’t naughty, but you’re ready for him or her to stop.

Immediately after doing it, remove your hand, and your cat should also over time develop an intuitive understanding that it’s time to stop.

Every so often, he got carried away and continued licking after I took away my hand, so I’d say, “Okay, okay, enough” gently, then pick him up and move him, or block the spot he was licking with my arm.

You may have to go so far as to bring in something else for your cat to lick, but if your cat is like mine, you likely won’t need to – they’ll probably get the picture.

In terms of why cats sometimes lick their owners’ hands and fingers, I honestly think there are so many different reasons, it’s hard to come up with a short list.

Many of these reasons overlap, and while some may be more true than others in the moment, I do think they all do quite well at explaining away this pretty common cat behaviour altogether.

Let’s get into the theories, and if you think of ones I missed, or feel your cat is more or less likely to lick your fingered hands for one reason over others – please share in the comments down below!

Why Some Cats Lick Their Owners’ Fingers & Hands

1. Your cat may really enjoy the act of licking.

I know this is likely so obviously you’d either think of it first, or wouldn’t think of it at all.

Some cats – like my first cat, Avery for instance – just don’t really seem to enjoy licking all that much, so you’ll rarely ever catch him licking fingers.

If you do, it’s likely only because…

2. Your fingers or hands could taste of food, causing a cat to lick for the flavour.

This is the only time you’ll ever catch Avery licking fingers and/or hands, and typically, it has to be something really compelling, as he won’t lick when the smell on my fingers is faint or is of something he’ll eat, but not obsessively.

I discovered my new cat Bjorn loves to lick and ingest soap this past month and boy would that explain some of his obsession with licking fingers & hands.

Soap is made in part with animal fat, and the same is true of many lotions, so I’m convinced he absolutely would like to lick lotions off my hands if given the chance as well.

4. Your cat may be trying to get your attention with the licking.

If Bjorn starts licking out of the blue while he’s been napping in close proximity to me, I’m convinced this is why.

As soon as he starts, I will typically take the hint and start petting him, to which he either starts licking more or stops, happily accepting the cuddles.

5. Your cat may be trying to tell you it wants something else by licking.

Some cats seem to use licking as a way of telling their pet parents they’re hungry or want to play.

Not mine, but if this is true of yours – do let me know how you discovered this and if there are particular times that your cat licks to tell you he/she wants something specific.

6. Cats that lick hands may be socializing with you & showing affection.

When Bjorn’s already got my attention, and is already getting the cuddles he wants out of me, there’s technically no reason for him to continue to lick if the only reason he was doing so was to flag my attention so that I would pet him.

He absolutely continues to lick my hand sometimes, simultaneously while I’m petting him, and in these instances I wholeheartedly believe it’s a part of how he socializes with me and shows me affection.

7. They may also be treating you like a feline family member – grooming & cleaning you.

Cats clean their feline friends and family members. They often can be found allogrooming – licking & cleaning – felines they co-exist with, and as a result, it would make sense if they also lick human hands and fingers because they are treating you as though you were one of the clowder.

8. Cats may lick to mark territory through scenting, showing other cats you’re theirs.

The act of grooming leaves that particular cat’s scent on whatever or whomever a cat happens to be grooming – it’s part of the reason cats groom their feline family members.

Scenting helps a cat tell other cats that thing, place, or person is theirs, so your cat may be marking you as his or hers while licking your fingers and hand.

9. Cats licking fingers may be showing dominance over you.

The less dominant cat will sometimes reciprocate, and begin to groom back, but also sometimes will not.

Either way, allogrooming seems to be about dominance, and not really all or even mostly about showing affection to another cat.

So the fact that your cat is grooming you may be in part because he or she is showing dominance over you.

10. Cats that lick fingers may also enjoy the taste of skin.

I feel this is absolutely true of Bjorn. I think he enjoys licking skin over clothing, for example, and considering his like of soap for the fact that it contains animal fat, and the fact that human hands have trace oils on them, I do believe this one adds up.

11. Cats that lick hands could really enjoy licking the texture of skin.

Some cats really love the texture of specific objects.

For example, lots of cats chew thin plastic shopping bags, lick those plastic bags, or even bite and chew on things made out of plastic in general.

It wouldn’t surprise me to learn the texture of skin on hands and fingers is really appealing to some cats.

12. Licking could be a behaviour leftover from kitten-hood.

Kneading is a feline behaviour that may be a leftover from kitten-hood, something like a human child may like to suck on a thumb as a behaviour reminiscent of his or her days as an infant.

13. Cats that lick hands could be self soothing – reducing stress.

The act of licking, like the act of kneading, is likely to be self-soothing and stress reducing, just like sucking on a thumb is for kids who still do it well past the age where it’s technically needed or useful.

It’s an action that fosters feelings of safety and security, meaning it likely reduces stress considerably.

What’s your best guess as to why your cat licks your hands’ palms and/or fingers?

Did anything on this list strike you as a potential secondary explanation you hadn’t thought of before or is it more likely your first guess was still the most solid reason?

Do you have any more guesses with regards to why cats sometimes lick fingers & hands?

Love to hear your thoughts! Please take a moment to leave them in the comments down below. 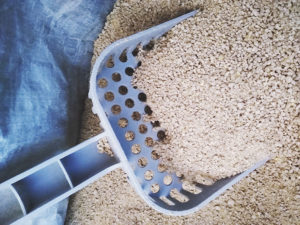 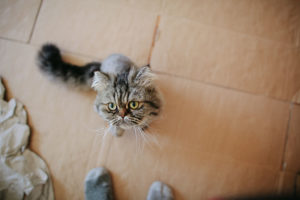 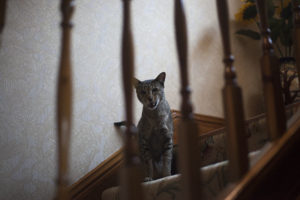