I received an email from someone named Connie who no doubt came across my article titled, “Is It Ok to Leave a Cat in a Cage All Day or at Night? (+Alternative Solutions).”

She outlined her night time routine with her furry friend, and to be honest, I do agree with her sentiment that – in her case – caging her cats at night is perfectly fine.

I will 100% have to state before I get into the email she sent, outlining what she does exactly, that I think this because her cats appear to be completely happy in their cages, and if this was not the case – or if this ever changed – I would not agree that caging her cats okay to do for so many hours in a day.

But since the cats are only caged for part of the day, since the cages seem to be incredibly well set up, since they are large cages, and since the cats actually seem incredibly happy to the point where they’re even excited to go into their cages for their nighttime routine, I would say that this may be one of the few cases where it’s actually alright, perfectly humane, and not detrimental to a cat’s mental health to do.

But let me show you her email so you can let me know what you think!

Here’s the email from Connie outlining how she has her cat’s night time cage set up, and what her cats have been like with regards to being caged at night.

(I’ve added paragraphs in her message for easier reading, just thought I’d state that for the record!)

Connie’s email is the following:

Hi Elise! I love your blog and am so glad I found you. We are getting a new Siamese kitten in about 5 weeks when she is 12 weeks old. She’s 7 weeks now and we’ve met her. She’s my 6th Siamese. I love the breed and now my husband is a true believer too. He’s known all my previous Siamese and we’ve had the last 3 together. So Maisie will be our 5th and my 6th one.

We don’t get a good night sleep with cats in our bed. So we put the first 2 kittens we got together in the laundry room. They had no problem there overnight. And the 3rd kitten went into a huge cage that held a nice bed, litter box, toys, food and water. The breeder suggested we do this as soon as she got home.

She absolutely loved HER cage for day 1 and it became her security blanket. At night she demanded we put her to bed in her cage and she watched to be sure we latched the cage door before leaving and turning off the lights. It was a ritual we went through until the day she died at 2 months just short of 16 years old. That was 5 months ago. She was also the healthiest, happiest cat alive. So this cage did not thwart her personality one little bit. She was super intelligent though which may also have helped.

I agree though that a small cage would be awful for a cat to be put in and it really depends too on how it is fitted out.

Our last cat who loved her cage had a foam pad on the cage floor that was cleaned daily. A lovely soft bed to stretch out in that was also cleaned daily. A kitty litter away from her sleep area which was cleaned out after every use. And plenty of clean water and food. This cage was also situated in HER room out of drafts where all her toys, tunnel, activity area and scratching post lived as well.

You can tell this was an over-indulged kitty. But then isn’t that what they’re supposed to be?! Ha! Ha!

So while cages may be bad news in the main, there can be exceptions. I think it’s how they’re started out.

We also don’t let our cats outdoors. There’s a law prohibiting cats in Australia from roaming as well or they will be picked up. That hasn’t been the way it’s always been but for around 20 years it has. But not one of our cats has even wanted to go outdoors.

That’s because there’s plenty of love, fun and food indoors to keep them happy.

We are retired now but as an academic, I had flexible hours and did a lot of work from home over the years. So puss didn’t mind my occasional absences to go off and earn some money so she could continue to live in the manner she’d become accustomed (smile)!

My Thoughts: Is It Okay to Keep Cats in Cages at Night?

Let me start off by saying that, in my opinion, Connie’s case is one that’s extremely special. I absolutely do not believe most cats would be okay being caged up throughout the night the way her cats are.

It’s probably a combination of so many different factors that makes this possible for her to do without it being problematic for her cats, for instance:

Essentially, it seems somehow Connie has managed to give her cats everything they need within the span of the daytime so that by the time they’re tucked away for bed at night, they’re content to just sleep and rest and with the space of the cage.

If this wasn’t the case, the cats would almost certainly show alarm, anxiety, and stress over being placed in the cage at night, or throughout the night by crying, meowing, fidgeting, banging on the cage to be let free.

I’m sure if this was happening, Connie would have noticed, and she does seem like a competent and kind pet owner, so I’m sure if they were doing this, not only would she have mentioned the distress her cats have with the carrier in her email, but I’m sure she would have stopped putting them in a cage at night.

Again, I don’t think keeping cats in their cages at night is something everyone can do with their cats. To be honest, I think with the vast majority of cats, a whole night is too long to be in a cage.

I simply cannot imagine cats being this chill for the whole night, so I think she has had a special bunch of kitties, and is definitely doing a lot right during the day to get all their needs met in the morning while they’re out of their nighttime cage.

Like I said – based on Connie’s email, I feel like if there was any stress, anxiety, jittery-ness, or hesitation to be in the cage at night, she definitely wouldn’t have continued doing this with her cats, and I would say the same should be true for anyone.

But if you end up in a situation where you need to put your cat in a cage, and can’t use one of the alternatives I outlined in this article here I can see how trying a cage out to see if you’re lucky enough to have a cat that’s fine with cages at night like Connie’s have been is a good idea.

The best option, in my opinion is definitely keeping your cat in a closed off room instead of confined specifically to a cage. I understand this isn’t always possible, but if it is, even a small room, like a laundry room, a small bedroom, or even a kitchen, is always better than a cage, especially if there’s window access so a cat can look outside.

As I said, I understand why this can’t always be done, and if you try out a cage in that instance and your cat is perfectly happy, if you are sure they are completely fine with it and content to be in the cage at night, I think it may just be a-okay.

If the cat shows even a little anxiety or stress or desire to not go into the cage, or not be in the cage anymore – it’s an entirely different story and at that point, as much as it’s frustrating that this solution didn’t work for you, it’s not okay for you to keep your cat in a cage at night in my opinion (the exeption of course being if this was a “doctor’s order” and your vet told you your cat had to stay in his or her cage for a particular reason, of course).

But those are just my thoughts! It’s your turn to take to the comments, letting me know what you think.

Your Thoughts: Is It Okay to Keep Cats in Cages at Night Under These Particular Circumstances?

What do you think about keeping cats in cages in general? How long is it okay to do this for? A couple hours at a time? Some time longer? Do you think it’s okay to keep a cat in a cage every night?

If you don’t think it’s okay – are there any circumstances you feel it’s acceptable to do so?

If you do think it’s okay to keep cats in cages at night – are there any circumstances you feel are off-limits, where you shouldn’t be doing it?

Love to hear your opinions in the comments down below! 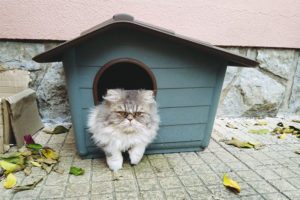 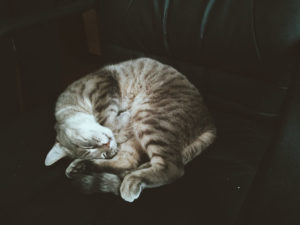 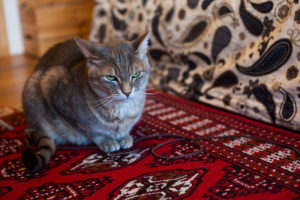